Artist and all around cool guy Jeff Johnson, turned me onto this Influence Map Meme created by fox-orian on Deviant Art. Like Jeff, I'm coming to this thing late, but it struck me as a fun diversion. The goal is to list your artistic influences, with the size of the artist's block relative to their importance to you. Fun times!

1) Phil Foglio - Oh god yes. I fell in love with Foglio's stuff in the Myth Adventures books when I was younger. I still love him in Girl Genius and even Xxxenophile. His fun, fluid, expressive cartoon style has been a massive influence on my style, and he's the artist I get compared to the most.

2) Norm Breyfogle - Still my favorite Batman artist, bar none. He's the artist that taught me the importance of shape and shadow.

3) Mark Kistler - A.K.A. "Commander Mark." Kistler hosted an instructional drawing show on PBS when I was a kid called Secret City. I watched it very day, drawing along with Commander Mark. Kistler taught me perspective, foreshortening, and how to make "wooshing" noises while drawing. I still whisper sound effects while drawing, and my "doodles" tend to look like Kistler buildings.

4) Tony DiTerlizzi - I fell in love with DiTerlizzi's stuff back int he later half of AD&D Second Edition's run. His D&D art broke the mold formed by Easley, Elmore, and others. I love how detailed his stuff was while still maintaining  a cartoonish sense of whimsy. He's doing The Spiderwick Chronicles and other kid's books now. He's still awesome.

5) Larry Elmore - I so badly wanted to be Larry Elmore as a kid. He's still my favorite classic D&D artist. His monsters are wonderful, his women are hot, and his composition is excellent.  My biggest thrill was being able to hang out with him at the Con on the Cob "Drink & Draw" a few years ago.

6) John Buscema - He taught me to "Draw Comics the Marvel Way" and was responsible for most of the art in all the old Avengers comics I read when I first got into comics. I used to practice by redrawing panels from Avengers, substituting my own characters.

8) Ben Caldwell - I only discovered Caldwell a couple of years ago, but he's been a huge influence on me in that short time. His style mixes the expressiveness of Don Bluth with the stylized simplicity of Bruce Timm and Mike Mingola.
Posted by Josh Burnett at 9:33 AM No comments:

Email ThisBlogThis!Share to TwitterShare to FacebookShare to Pinterest
Labels: art, things that amuse me

While scouring through the Jason Morningstar's Bully Pulpit Games site, looking for Fiasco playsets, I ran across Dungeon Squad!

Dungeon Squad is Jason Morningstar's small, rules-lite classic fantasy RPG designed to get young folks into gaming.  It's no secret that over the past few years I've been getting into old-style system-lite RPGs--QAGS (obviously), and Risus, but also older games like Tunnels & Trolls and old "Red Box" D&D. Dungeon Squad fits right in with those. The game is also nice and hackable, easy to modify and mold to lots of different settings and styles.  Jason Moringstar released the game under Creative Commons, and Dungeon Squad's Wikipedia page has links to several different versions that fans have made.

So yeah, I'm really digging the game so far, though I haven't had a chance to play it. I'm hoping to run it next time  one of my game groups has a "beer & pretzels" night. I'm also planning on running it for my 11-year-old son. I've also been taking stabs at hacking the game myself, working on a MMORPG-pastiche fantasy game called "Epic Mount!" 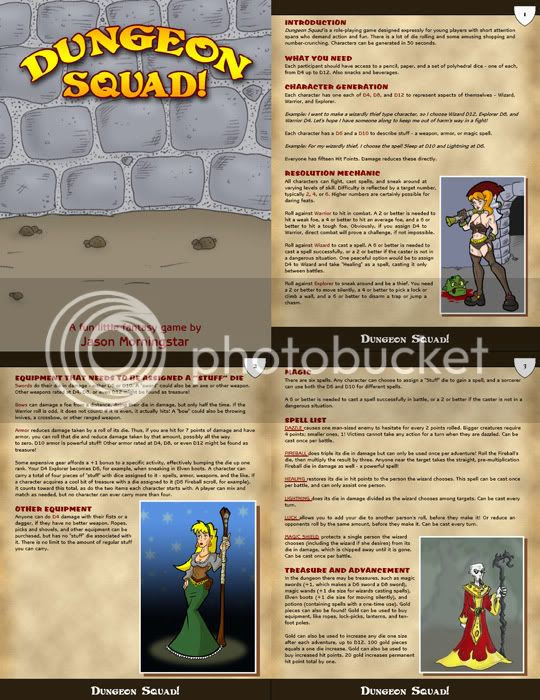 Last week, I found myself with some time on my hands, looking for an excuse to avoid doing "important" and "necessary" stuff.  I felt like playing around with layout and Dungeon Squad was fresh in my mind. I also had a few fantasy illustrations laying around that I had done and weren't attached to anything.  To make a long story short, I went and took Dungeon Squad (which was pretty much just a boring old plain text file) and jazzed it up with a fancy-shmancy layout. I think it looks pretty nice and it was a nice bit of practice for me. You can check it out here.
Posted by Josh Burnett at 10:29 AM 3 comments:

Email ThisBlogThis!Share to TwitterShare to FacebookShare to Pinterest
Labels: dungeon squad, rpg, things that amuse me

Down the Gullet of the Space-God! 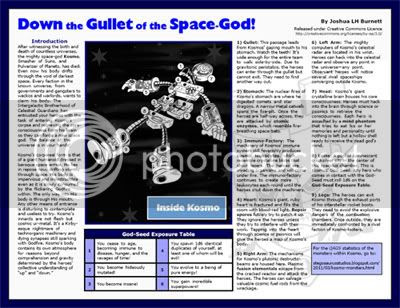 "Down the Gullet of the Space-God!" is done, and you can download it here. As per the contest rules, there are no game stats in dungeon, but you can see the QAGS stats for the critters here.

This has been a fun exercise. I found out about the One Page Dungeon Contest yesterday and was immediately intrigued.  I've written many, many adventures of the years, and it was a fun creative challenge to come up with something unique and new and fit it all on one page.

It all came together pretty quickly. First,  I glanced through the past years' entires to see what kind of things other people were doing. I knew right away I didn't want to make a classic underground fantasy dungeon. Something in space perhaps?  I liked that idea, but I didn't want to do the old "abandoned space station" or "starship overrun by alien monsters" thing. Then I remembered an adventure Ian Engle ran a few years ago where our troubleshooters were crawling through the body of a dead angel under lake Erie. "Hmmm..." I thought, "Giant space god? Something like Towing Jehovah with Galactus?"

Rather quickly, I had a sketched out a thumbnail of the "dungeon" inside a space god. I was pretty happy with it. "Now, I'll just type out some quick ideas then move on to other projects.I'll come back to this later," I said to myself. The next thing I knew, several hours had passed by. I had a complete text written and I was moving on to layout.

Again, this project has been big fun, and I look forward to dong more of this sort of thing. If any of my game-designy friends are reading this (and why wouldn't you be?) I encourage you to go tot he One Page Dungeon page and enter the contest.
Posted by Josh Burnett at 9:37 AM 4 comments:

I was just made aware of the One Page Dungeon Contest. I don't know how these things escape my notice. It's got me mightily intrigued. The deadline for submission is April 1st, which is none too far away, but I think I can probably squeak in.

My dungeon is set in space. The mighty space-god Kosmos has died, and the heroes must enter his body and retrieve his core consciousness so a new astro-thurge can be born.

I spent the morning sketching out ideas. When I'm done, I will very probably link back to this blog with QAGS stats (the official entry should be stat-less). 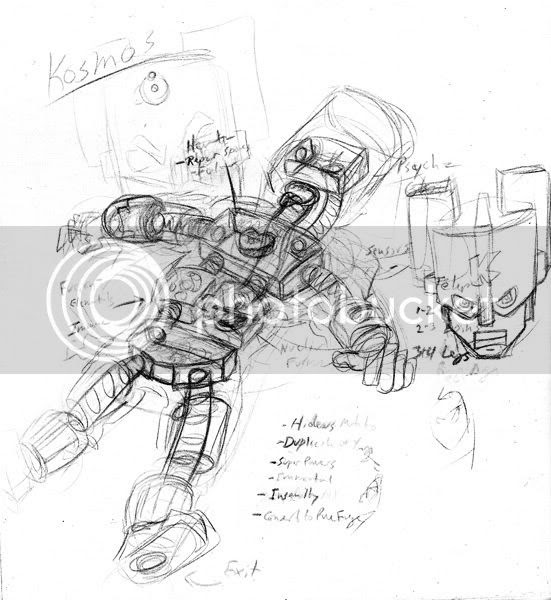 Posted by Josh Burnett at 8:16 AM No comments:

Email ThisBlogThis!Share to TwitterShare to FacebookShare to Pinterest
Labels: design, rpg, things that amuse me

Mustache on a Stick?

Indeed. Another of the charming little places I found on the Internet is Whisker Works, an Etsy artisan that sells, yes, mustaches on sticks. It tickles me for reasons I can't explain.

They've got a contest on their Facebook going on right now, You should check it out.
Posted by Josh Burnett at 9:20 AM No comments:

Email ThisBlogThis!Share to TwitterShare to FacebookShare to Pinterest
Labels: internet frivolity, things that amuse me 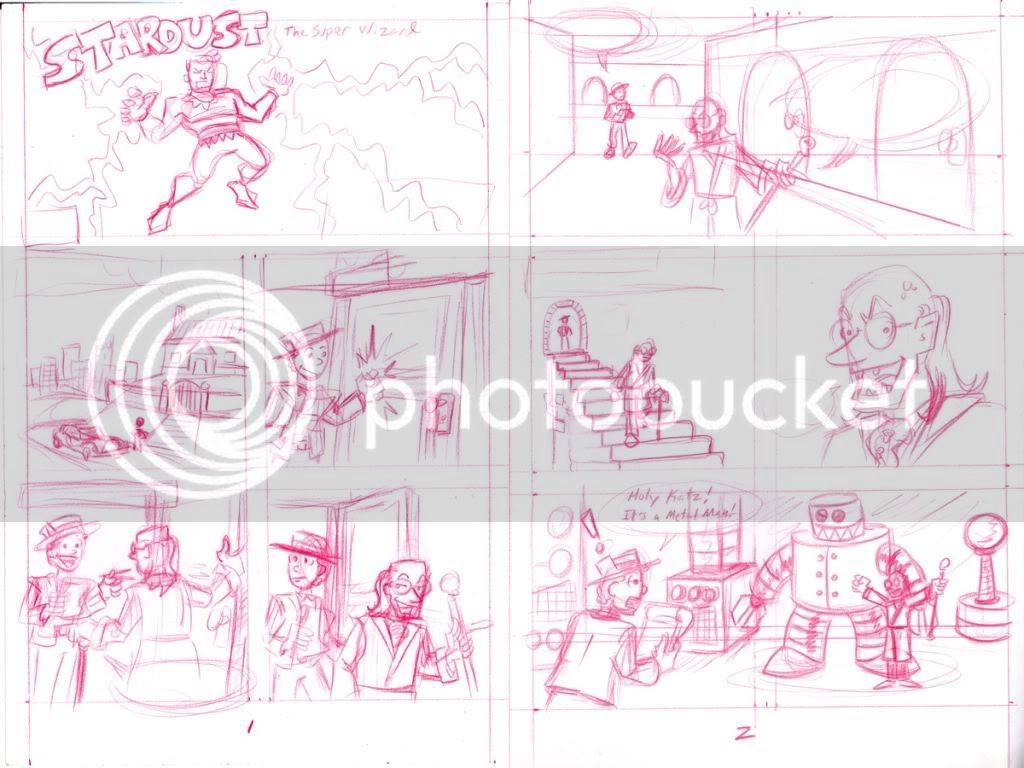 Yup, it's a Stardust comic!
Posted by Josh Burnett at 7:37 AM No comments:

At long last, the eBook is done and ready for you (yes, YOU!) to buy right now!

Hope you all enjoy it! Buy several copies!
Posted by Josh Burnett at 8:54 PM No comments:

Gencon this year for sure!

It is my goal this year to actually go to Gencon. I was all registered to go last year and everything, but life threw me a curve-ball last summer, and things fell apart.

But this year for sure!  My registration is complete, and my events are submitted. Here's what I'm gonna be running...


Leopard Women of Venus
You are one of the mighty Leopard Women of Venus, sworn to protect human civilization! Dare you brave the strange jungles and hideous mutants to fight Spider Priests and the insidious Fifth Column? The fate of Venus rests in your hands! It's Golden-Age goodness in the style of Fletcher Hanks with QAGS!


Sindbad and Watwat King of Bats!
The tiny island kingdom of Zambukistan is known for three things—fabulous riches, beautiful princesses, and giant bats! When Princess Lakshmi is abducted by winged things in the middle of the night, it's up to Sindbad and his daring crew to save the day.


Hobomancer: Bad Train a' Comin'
The railroads run along America's great ley lines, and only the Hobomancers can keep them clean of evil and preserve the nation's soul. Word on the rails is that there's something uncanny killing folks in Stubenville. Time to hop a train and put a stop to it.


Sword & Sorcery: Curse of the Alchemist
The savage land of Vekros is home to bold men, brazen women, scheming sorcerers, and hideous beasts. Only by blood and by steel shall you live! Some say the tablets of the legendary artificer Kaarn hold the secrets to everlasting life. Are you brave enough to face the curse of the Alchemist?
Posted by Josh Burnett at 3:24 PM 4 comments:

Email ThisBlogThis!Share to TwitterShare to FacebookShare to Pinterest
Labels: conventions, gencon, rpg
Newer Posts Older Posts Home
Subscribe to: Posts (Atom)
Commissioning a sketch? Use the handy Paypal button below to make things super-simple!
Thanks for your patronage!