Need a name for a new blog.

I want to set up a new blog dedicated to comics. It will have Adventure Jeff, as well as the Warrior Girl of Titan comic I have in the works and the Neo-Golden Age stuff like Stardust. I find myself torn on the name, though. I'm stuck between "Tubular Spacial" which sounds kind of cool and is a Stardust reference, and plain old "Adventue Jeff Comics" even though there will be more than just Jeff. It's simpler and easy to remember/spell, though.

Any suggestions, folks?
Posted by Josh Burnett at 10:05 AM 1 comment:

Even though Leopard Women of Venus is done, I've apparently still got Fletcher Hanks on the brain!

I've talked about this guy before.

Stardust the Super Wizard has the dubious distinction of being Fletcher Hanks' most famous creation. This Superman analogue doesn't quite "fight crime" in the usual sense. As Leighton Connor describes it, he's more like an Old Testament God handing down cruel judgement.  Like all of Hanks' stuff, he's public domain, so anyone can use him, and several have.  I felt inspired to pen my own Golden Age Stardust tale, and now I'm going to share it with you. Enjoy! 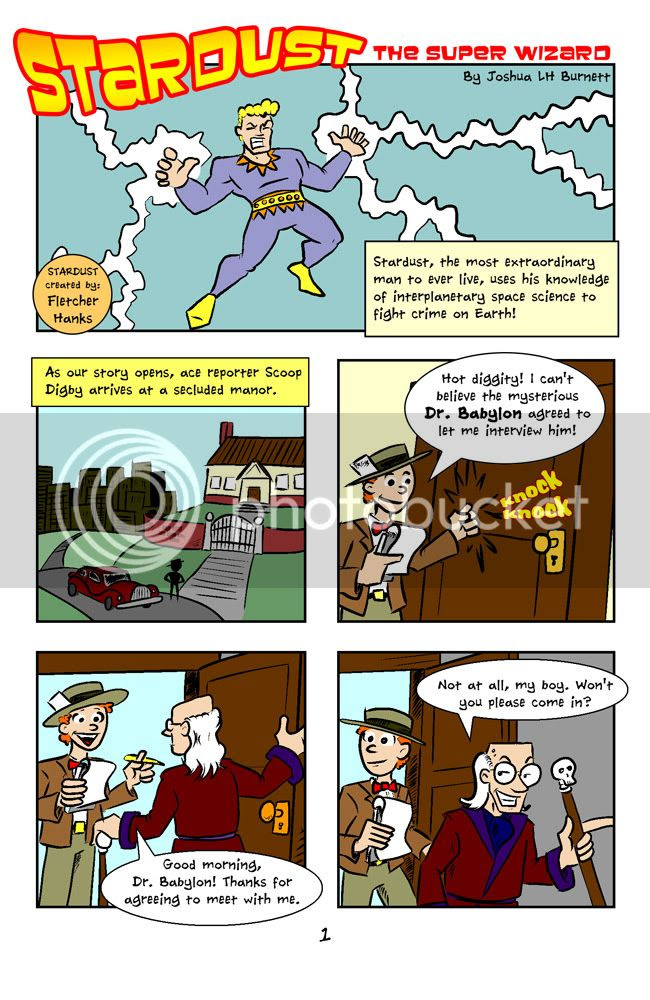 The action continues after the break!
Read more »
Posted by Josh Burnett at 8:04 PM No comments:

By good friend and Leopard Women co-conspirator Leighton Connor has a new comic he's working on called "Laser Brigade." He's scanning and posting it bit by bit.  It's got robots, spaceships, and pure concentrated awesome.  I really dig Leighton's stuff, you should check it out!


Posted by Josh Burnett at 3:33 PM No comments:

Email ThisBlogThis!Share to TwitterShare to FacebookShare to Pinterest
Labels: art, comics, stuff my friends made
Newer Posts Older Posts Home
Subscribe to: Posts (Atom)
Commissioning a sketch? Use the handy Paypal button below to make things super-simple!
Thanks for your patronage!