Happy Holidays! As a treat, here's a special Christmas episode of Adventure Jeff! 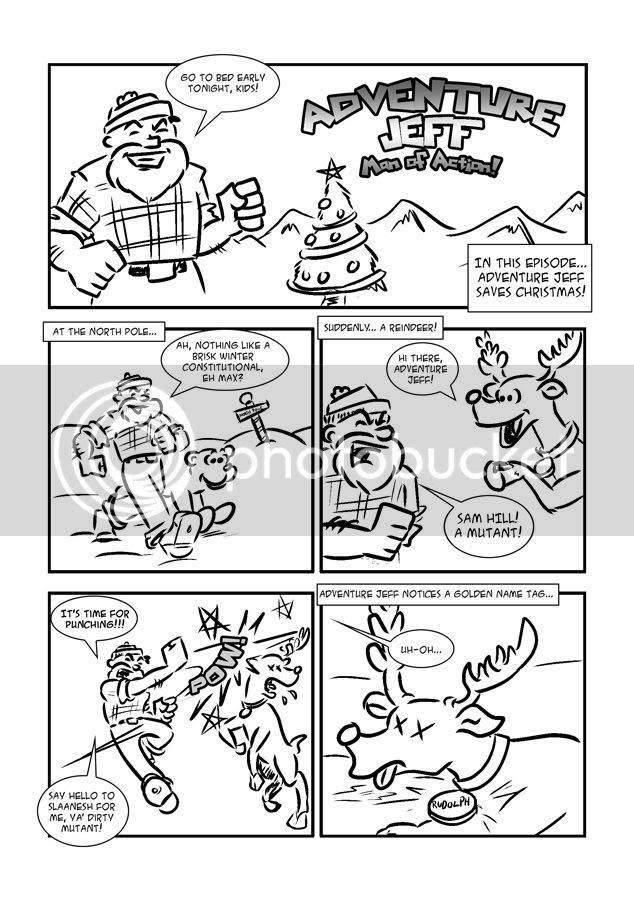 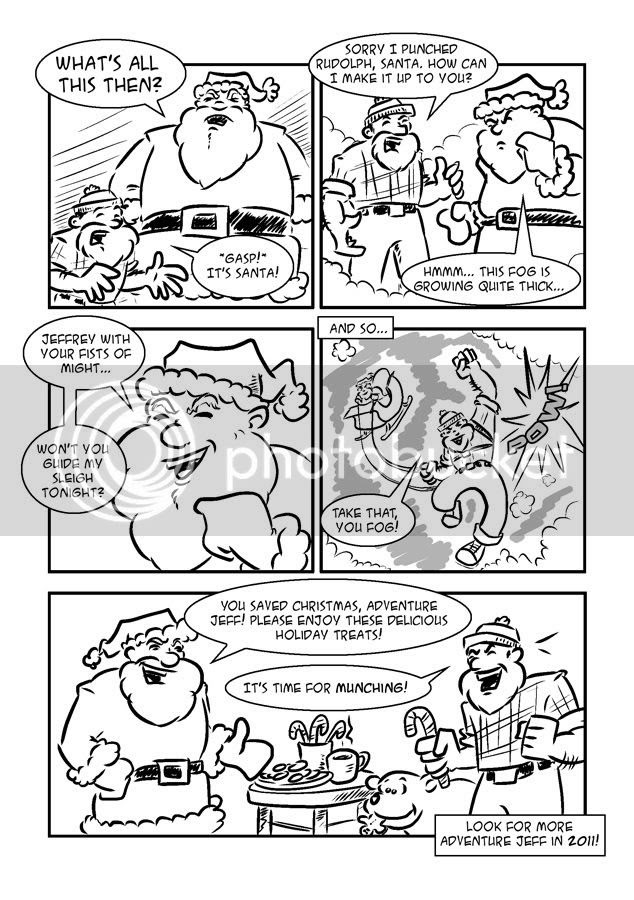 It suddenly occurs to me that I haven't posted any of my Adventure Jeff comics on this blog. Allow me to rectify this!
More Jeff after the jump!
Read more »
Posted by Josh Burnett at 6:42 PM No comments:

See more Happy D20 Adventures from Leighton Connor and I at The Death Cookie! 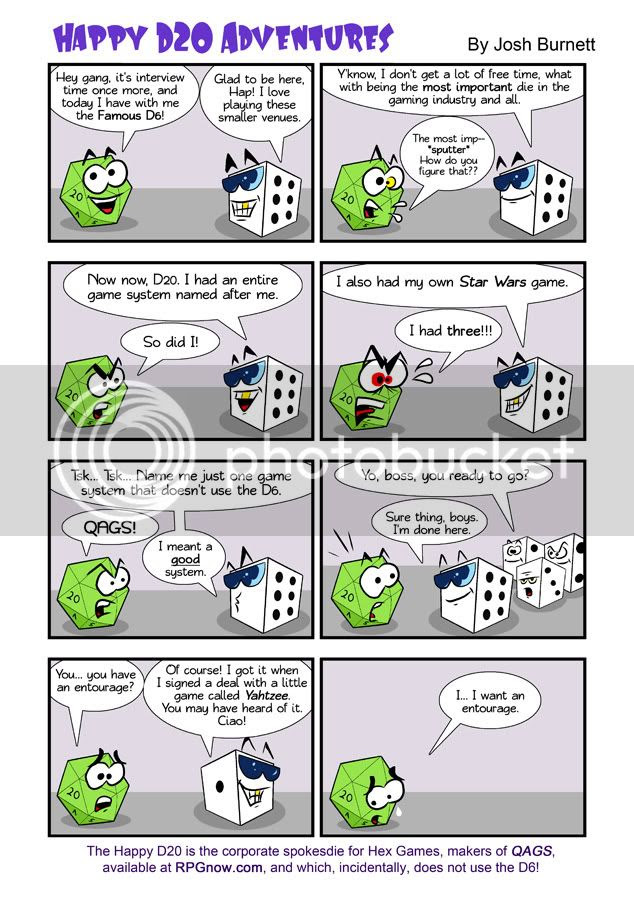 Posted by Josh Burnett at 8:06 PM No comments:

Over at Monkey's Took My Jetpack, we've been playing Zorcer of Zo, a wonderful fairy tale RPG, and one of my favorites. I've been running the last three sessions, but Blindgeek is going to take over for the upcoming Christmas adventures.

This is my character; I'll draw him later:

Soldier Jack (aka Jack of the roads, aka Jack the Giant Killer, aka Clever Jack) is based on the English/Appalachian culture hero, Jack. I am basing him more off the Appalachian version (mostly a matter of semantics; he climbed a bean tree, as opposed to a bean pole).
Jack grew up the seventh son of a seventh son in a poor farm family in the hills of Giallo. He learned to survive by his wits ad gift for trickery. He has killed giants, tricked devils, cheated Death (capital D), and even served as a soldier in the grand army of Zo. Now he wanders the land, still seeking his fortune.
Jack is not always good, but he is never bad. Despite his roguish nature, Jack has a good heart. He has actually gained several fortunes, but he can never hold onto money. He either fritters it away, donates it to a worthy cause, or gives it to people who need it more than he does.
Jack is lanky, but not overly-tall, with brown eyes, a ruddy complexion, and shaggy brown hair. He could either be a withered 25 or a well-preserved 50. He dresses in sturdy, but well-used travelers clothes and the faded and patched old coat from the Zo military. He sold his rifle and pike long ago.
Soldier Jack
Citizen of the World
Qualities:
Trickster (Master +6) – Jack can lie, cheat, and steal better than anyone.
Vagabond (Good +2) – Jack knows a little bit about a lot of different places.
Soldier (Good +2) – Jack's seen his share of battle and action.
Heart of Gold (Good +2) – Jack's good nature connects with people.
Penniless (Poor -2) – Jack just can't hold onto money.

Posted by Josh Burnett at 7:42 PM No comments:

Between working on various Hex Games stuff, getting the new podcast of the ground, and failing to avoid the lure of sweet mistress Warcraft, I haven't gotten a lot of new stuff done.  Add to the mix various independent RPG projects, and I fear I might be spreading myself thin (the only way I've ever been thin). Let's not talk about the holidays, okay?

Monkeys Took My Jetpack Episode 2 is out!
and
Hex Games has a huge holiday sale going on!

Just to round things out, let's post some old artwork! 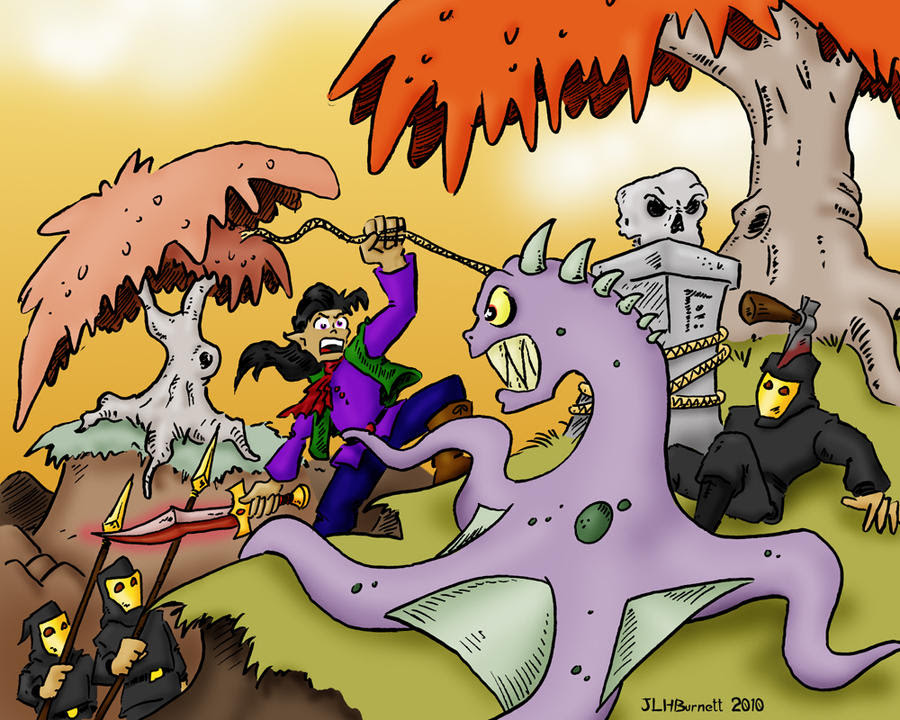 A young Ven noble goes Orc Hunting! This piece was inspired by John Wick's wonderful Houses of the Blooded RPG. You should really check it out! 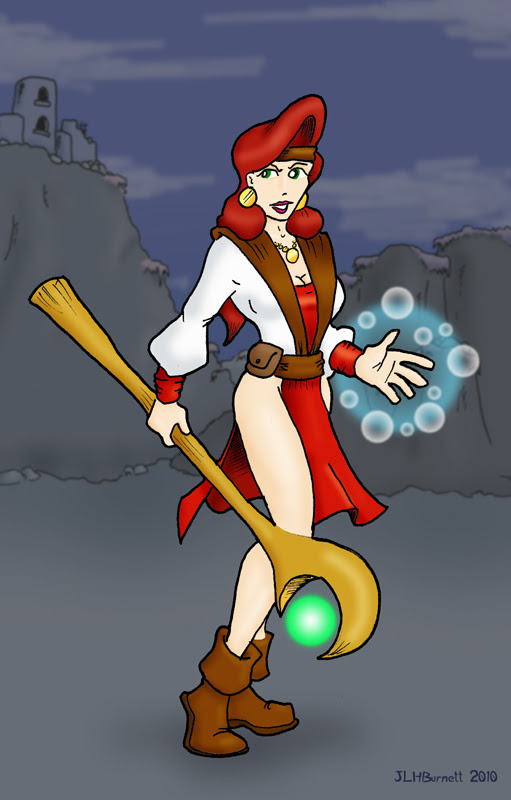 A couple of dungeoneers dungeoneering. I never gave them names.
Posted by Josh Burnett at 2:43 PM No comments:

Email ThisBlogThis!Share to TwitterShare to FacebookShare to Pinterest
Labels: art, procrastination, qags
Newer Posts Older Posts Home
Subscribe to: Posts (Atom)
Commissioning a sketch? Use the handy Paypal button below to make things super-simple!
Thanks for your patronage!