Sketchin' in that Sketchbook

I took a break from Leopard Women of Venus to play some Dungeons & Dragons this past week (I play awesome paladins.) Of course I have to doodle while I play. Here's a couple of things that fell out of my pencil. 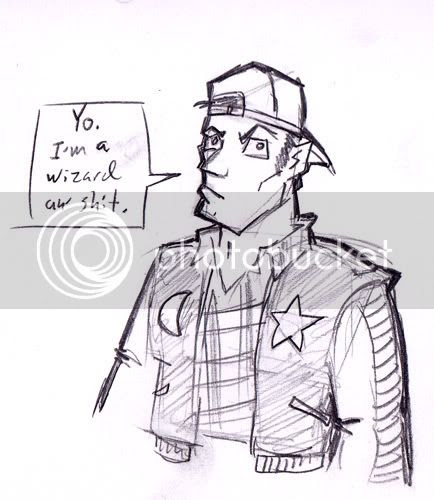 This here is Tony, a wizard. I created him a few years ago for an American Harry Potter game I was playing.  I might repurpose him for the Dresden Files game. 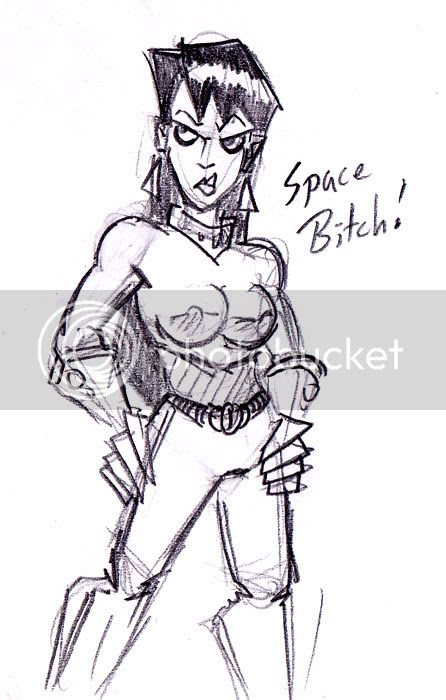 I don't know who the Space Bitch is or what she wants or who pissed her off, but man she looks feisty. I wouldn't want to mess with her.  Maybe I should make a comic strip about her.
Posted by Josh Burnett at 4:11 PM No comments:

Production on Leopard Women of Venus continues at a steady pace.  I've been bouncing back between bursts of art and writing. The last few days have been art. Take a look at these pencil thumbs... 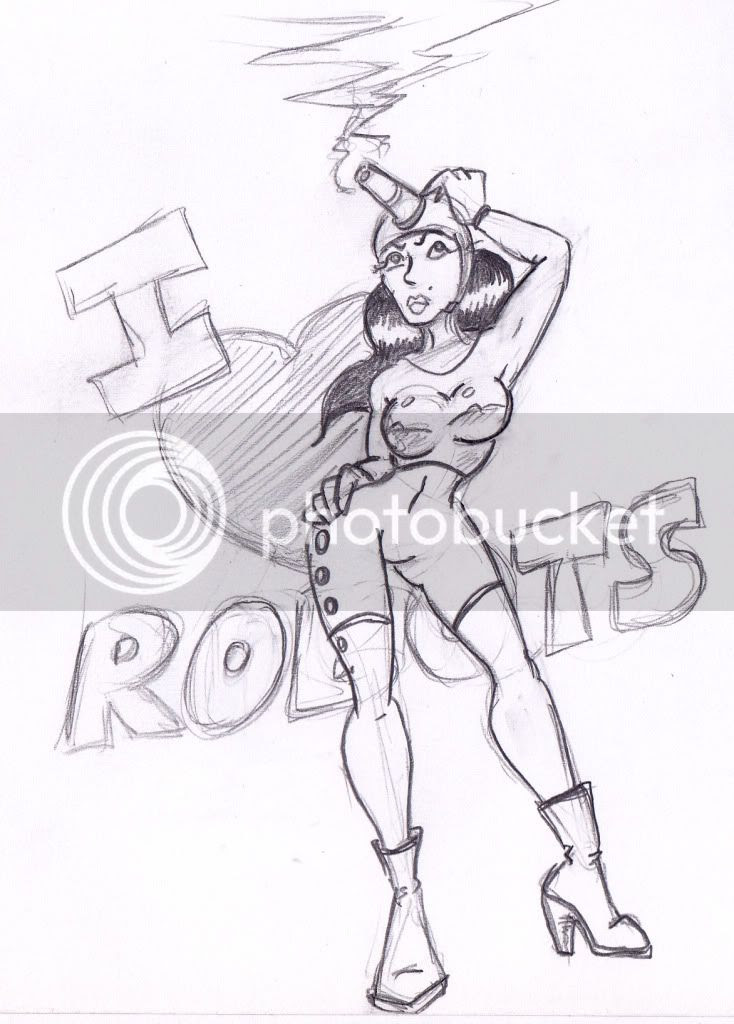 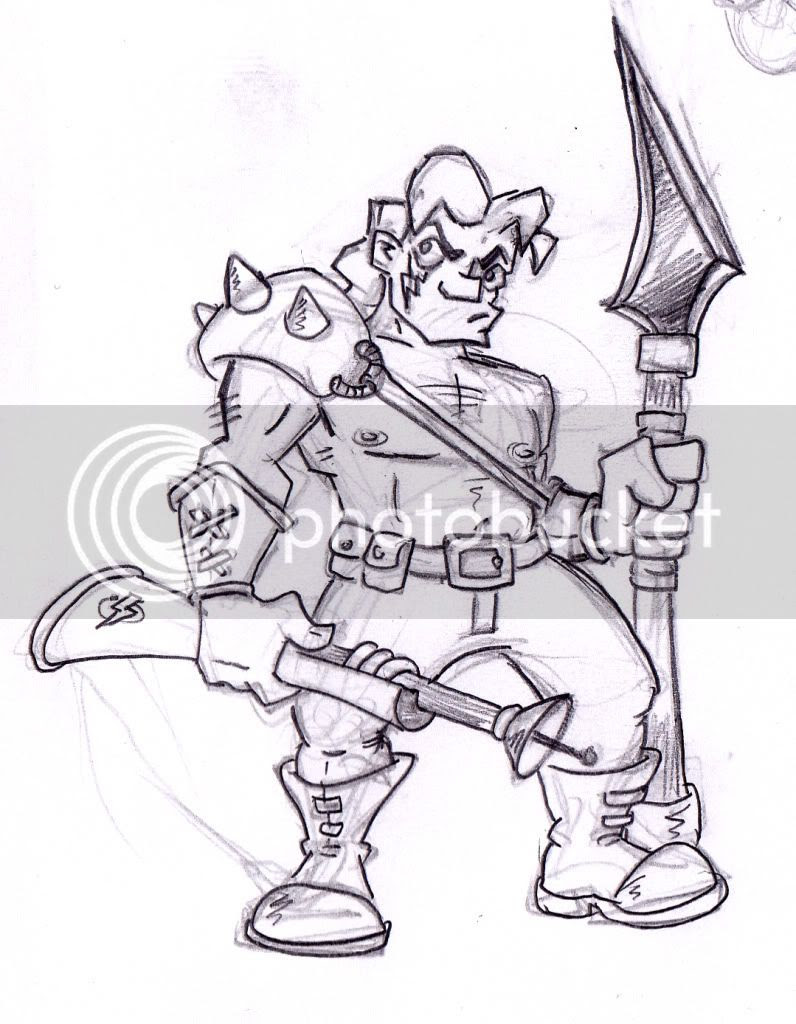 Posted by Josh Burnett at 6:37 PM No comments: 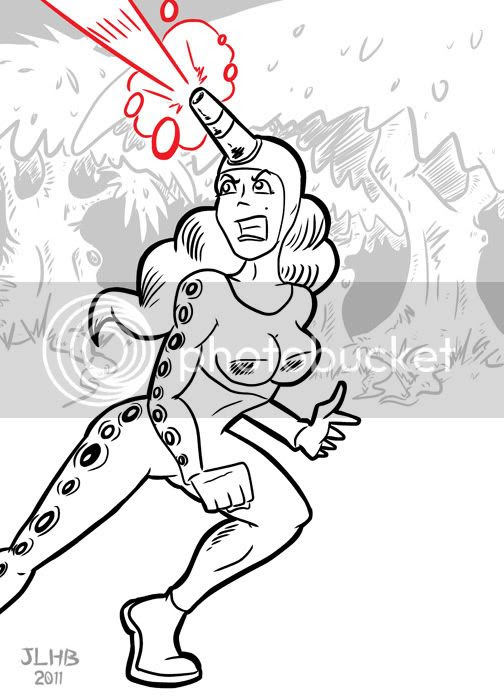 Posted by Josh Burnett at 5:53 PM No comments:

He's here to help! Everybody run for cover! 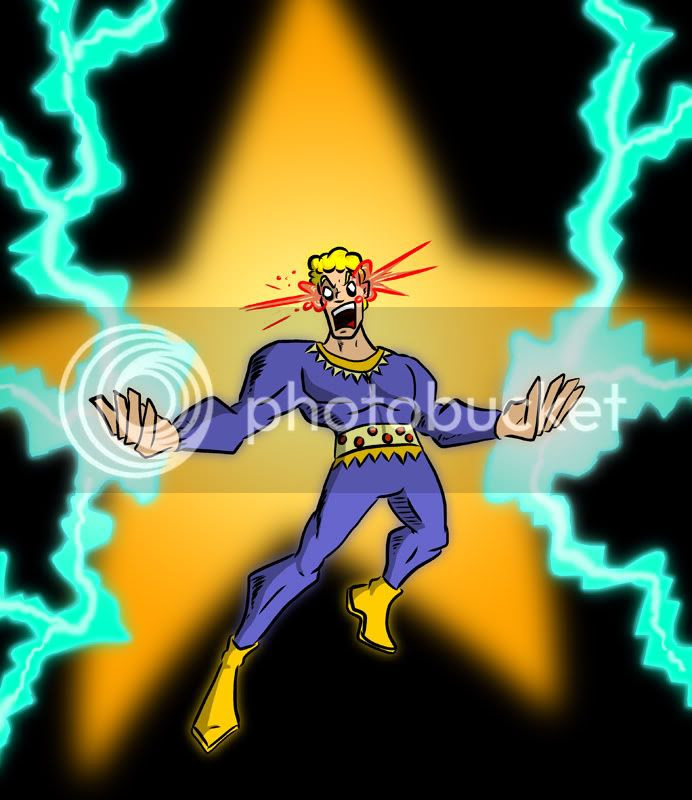 Posted by Josh Burnett at 6:47 PM No comments:

New from Hex Games, it's American Artifacts 2! All sorts of object of mystical significance with a uniquely American flair!

CHECK IT OUT!
Posted by Josh Burnett at 1:40 PM No comments:

Email ThisBlogThis!Share to TwitterShare to FacebookShare to Pinterest
Labels: qags

Been working on "Leopard Women of Venus" all day, the new QAGS book that Leighton Connor and I are collaborating on.  I've mentioned it before, but the long and short of it is that it's a surreal sci-fi setting based on the works of Fletcher Hanks.

I focused on threats from Outer Space today. Here's a couple of things from the stars that might kill you.

Giant Kill-Bot
Giant Kill-Bots are 12-foot-tall metal monstrosities that crave human flesh. They are vaguely humanoid with massive grasping pincers and gnashing mouths full of bone-grinding teeth. Also they breathe fire.
Body: 20
Brain: 8
Nerve: 16
Job: Metal Monstrosity (16)
Gimmick: I'm Huge! (15)
Weakness: Ponderous (15)
Skills: Destroy +5
HP: 35
YY: 5
WWPHITM?: A Ray Harryhausen creation
Tagline: “Kill... rend... eat...”
Dumb Fact: The Science Robots are strangely quiet on the subject of Giant Kill-Bots.
Notes: The Giant-Killbots' teeth and claws have a Damage Bonus of +5. Their fiery breath has a damage bonus of +3 but targets every opponent in a 10-foot area. Their metal carapaces give them an Armor Rating of 5.
I'm Huge!
Giant Kill-Bots are massive things possesing great strength. When trying to accomplish a physical task beyond mortal human ability you may roll this Gimmick. While performing purely mundane physical tasks you may use this Gimmick as a Second Chance roll. You may also add the Gimmick Number to Body to figure out the Giant Kill-Bot's base HP (this is already figured into the stats above).
Ponderous
Giant Kill-Bots are heavy things used to the weightlessness of space. As such, they move slowly and are somewhat clumsy. Roll this Weakness before trying any task that requires speed or grace. If the Weakness takes effect, the Giant Kill-Bot crashes to the ground.
Star Demon
Star Demons are hideous monsters from some unknown region of space. A Star Demon resembles a hideous monster head help aloft by two pairs of serrated bat wings. Three slime-dripping tentacles dangle below the creature. Star Demons always operate in packs of three to twelve.
If a Star Demon kills a human, the creature will rip eat the victim's head, then attach itself to the neck stump, taking control of the body. It will then use this host body to mate with a human and create more Star Demons, which will burst out of the human parent's stomach (male or female) in three days. These new Star Demons emerge fully grown and ready to kill.
Body: 13
Brain: 16
Nerve: 18
Job: Predatory Parasite From Beyond the Stars (14)
Gimmick: Disguise (12)
Weakness: Alcohol Aversion (12)
Skills: Seduce +1, Infiltrate +2, Seduce +1
HP: 13 (but see notes)
YY: 3
WWPHITM?: Robert Englund
Tagline: “I feel the need. The need... to breed.”
Dumb Fact: Won't call you the next day.
Notes:
The HP listed above represents the Star Demon without a host body. When attached to a human body, add the victims original (pre-death) HP to the Star Demon's HP.
A Star Demon's razor-sharp wings and nasty teeth give it a Damage Bonus of +4
Disguise
Through sophisticated voice-acting, limited shape-changing ability, and clever use of hats, the Star Demon can pass itself off as human when attached to a body. It will have no idea of the victim's personality or history, but can make a passable impression of the host. A successful Brains check against the Star Demon's Gimmick will see through the ruse.
Alcohol Aversion
Star Demons are very allergic to alcohol, even something as weak as beer. If the Weakness roll takes effect, a Star Demon will be repelled by even the faintest whiff of alcohol. If the Star Demon comes in contact with alcohol, make a Weakness roll. If the Weakness succeeds, the demon will take damage equal to the roll, as the alcohol burns its flesh. Sadly, the Science Robots' strict prohibition against alcohol has made the substance hard to find in the caverns.
Posted by Josh Burnett at 3:33 PM 1 comment:

I've been sick for almost two weeks. If I die, please feel free to use me as a Universal Health Care martyr.

It's put a big damper on all the creative projects I was going to start in 2011, but I'm finally starting to feel better.  I've got plans to do a regular weekly webcomic, and I've started the slow process of putting my name out to a few people. Hopefully I can drum up steady work and start slacking on my day job. Maybe. Hopefully.

Anyway... MAPS! Everyone loves maps! One of the things I've come to realize by lurking on the fringes of the indie RPG community is that gamers love maps. They especially seem to love groovy hand-drawn maps rather than slick, computer-created graphical maps.

Well, guess what? I love maps too!  They've always been fun to draw, and like Slatrtibartfast, I love the little crinkly bits the best.  I've been drawing maps for as long as I've been gaming. I'd love to share some of them with you.

I'm going to start with the more recent stuff.  I'm digging through a bunch of my old notebooks, rediscovering the monstrous maps I made in my younger days.  Once I get those all scanned, I'll be sure to share!

First up is a map of Sindbad's Africa. I did this piece for Hex Games. It was one of the few Maps I've done of an actual real-life place.  The map doesn't show any interior geography, but I still like it.

Next is a map of Tatvash Ni Devah, the barony controlled by my Houses of the Blooded character. This map doesn't have many labels, because it's supposed to be an old artifact of the Ven. Any script is in their obscure language. I love drawing craggy, loopy mountains. Last, we have Panagonia, home to the Laser Ponies from Hex Games's Laser Ponies RPG. This map was especially fun to do thanks to Leighton Connor's fanciful descriptions of the fairytale geography. Again, I love drawing them mountains.
Posted by Josh Burnett at 1:52 PM 2 comments: more HERE!
Posted by Josh Burnett at 10:12 AM No comments:

Email ThisBlogThis!Share to TwitterShare to FacebookShare to Pinterest
Labels: comics, happy d20
Newer Posts Older Posts Home
Subscribe to: Posts (Atom)
Commissioning a sketch? Use the handy Paypal button below to make things super-simple!
Thanks for your patronage!